The Remote Working Revolution: What's next for #WFH in the UK? 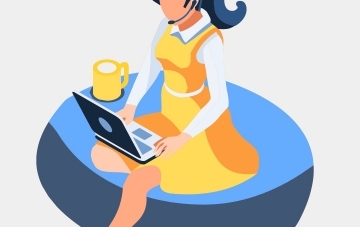 The Remote Working Revolution: What's next for #WFH in the UK?

For most people, the past 18 months has irrevocably changed our working environments. We can see infection control policies and social distancing rules enforced in any communal workplace now. Still, the most significant shift in work-life globally is the shift to homeworking.

Working from home has several benefits, including more flexibility to work around home life, fewer interruptions from office chat, and no commute. On the other hand, homeworkers also report more difficulty separating work and home life, and a lack of in-person contact. Nonetheless, homeworking was often a coveted perk for many.

Pre-Covid-19, regular homeworking was the norm for only a few. The Office of National Statistics (ONS) reported that between January-December 2019, just 5.1% of the UK workforce said they worked mainly from home. 1% said they worked on the same premises as their home, such as farmers or people with a shop attached to their home. Just over 8% worked with their home as a base, travelling to multiple locations. Historically, occupations requiring higher qualifications and experience were more likely to offer homeworking options.

In 2019, the law stated that any employee with a minimum of 26 weeks of service could make a flexible working request. This right is available to all workers, not just those with parent/carer responsibilities. Employers could reject these requests provided there was a good business reason for doing so. The above is still the law at the time of writing this blog, but recent developments suggest there could be changes in the future. More on that later.

In March 2020, the UK was plunged suddenly in to a national lockdown to slow the spread of Covid-19. The Government told the public that they must work from home where they could. All non-essential retail outlets and other public premises were closed. Millions of workers were either furloughed or thrust into homeworking. For some, this was the first time they had worked from their home environment. Problems arose from the lack of proper facilities, not to mention that schools were also closed, meaning a considerable proportion of the UK's workforce was also home-schooling. 47% of homeschooling parents said their job was negatively affected by this.

After the initial panicked rush for business continuity subsided, homeworking began to feel somewhat comfortable. It quickly became apparent to many businesses that not only were their employees adapting, but they were also more productive and focused when working from home. Once a perk bestowed sparingly for fear of work-rate issues, it was now proving to be a more efficient workplace structure than had been realised previously. Quite simply, remote working, worked.

Millions of us have now been homeworking for over a year. In 2020, 35.9% of the employed population worked from home at some point, a massive increase on the previous year. And yet, for the most part, businesses with homeworkers were still able to operate normally. This, coupled with the increase in productivity, suggests that homeworking – rather than being a temporary fix - is a viable working arrangement that may be here to stay.

We have seen a steady increase in the number of home-based and hybrid roles advertised. More and more companies are beginning to recognise the benefits of recruiting for flexible positions, enjoying the productivity benefits already mentioned, and the advantage of being able to recruit from a much larger talent pool with location removed as an obstacle. Not all businesses are enthusiastic about the continuation of remote working though; Goldman Sachs boss David Solomon described it as "an aberration that we're going to correct as soon as possible."

Last week saw a news report that the Government was putting together a task force to decide how best to proceed with Flexible Working legislation in the future. There is also talk on the future of the remaining Covid-19 restrictions in the workplace. Ministers have been advised that a sudden removal of all restrictions is risky, and so it's thought that the Government is considering a hybrid approach in the immediate future.

Public opinion is somewhat divided on what the long term future of remote working will be. One think tank told the BBC they expected the 5-day working week to become the norm again as soon as within the next two years. Others - to the contrary - believe there is no turning back from their new way of working. Though an increase of people returning to the office is undoubtedly on the cards, the last 18 months will surely continue to have a lasting impact on flexibility expectations and requests in the workplace.

Whatever sort of role you're looking for, Kirkland Associates can help. Give the office a call today on 01332 638035 for a chat about your next career move.

Show All Blog and News

Please agree to the conditions first.

Before you continue to the site

You can make your choice below and modify them at any time by going to the "COOKIES MANAGEMENT" section at the bottom of the page of the Site. Your choices are kept for a period of 6 months.